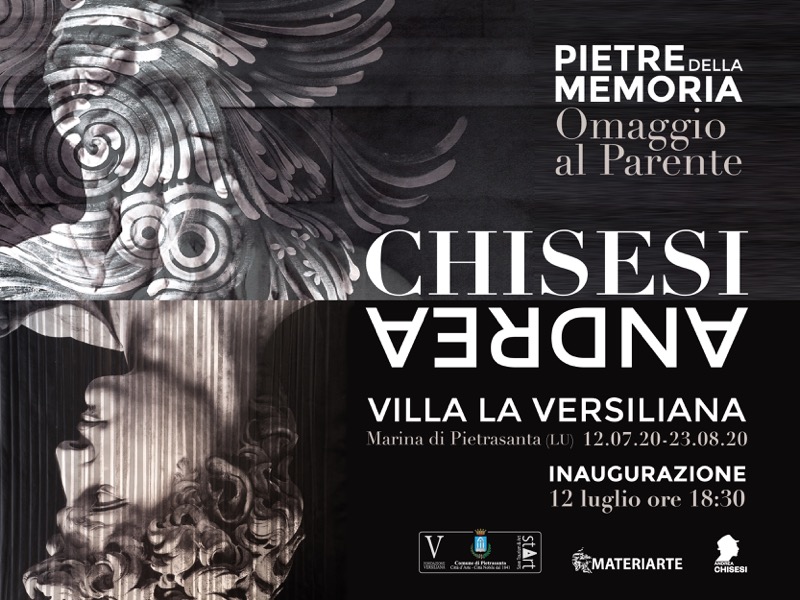 It opens on sunday 12 July, at 6:30 pm at Villa Versiliana in Marina di Pietrasanta (LU) “Memory Stones. Tribute to the Relative”, Andrea Chisesi’s exhibition which will continue until August 23, 2020, with free entry.

Curated by Marcella Damigella and included in the program of the 41st Versiliana Festival, the temporary exhibition is dedicated to Michelangelo, and in particular to the profound bond that Gabriele d’Annunzio had for the genius of Caprese to such an extent that he was considered “the relative” .
In this sense, Versiliana appears to be the perfect place for the exhibition of Chisesi since, if on the one hand the Cervaiole quarry of the nearby Monte Altissimo offered Buonarroti the raw material “of a uniform, homogeneous, crystalline grain” for some of his masterpieces, on the other just under the tall pines of the historic Versilia villa, in the summer of 1902 d’Annunzio composed
the famous lyric The rain in the pine forest, inserted in the “Alcyone”, the poetic project of the Vate.
In all, 41 unpublished paintings on canvas and 70 works on Chisesi paper will be visible which, in a journey between myth and beauty, will occupy the large rooms of the Villa La Versiliana, plus one where six videos dedicated to the work will be projected seamlessly of the Roman artist by birth and then Milanese by adoption, but who now resides permanently in Syracuse.
But that’s not enough: among the 41 works on canvas there is one, entitled Il Vate (and whose image will be projected on one of the external walls of the Versiliana), which represents the exclusive preview of “Tempora Vatis”, the new shows that the artist will soon dedicate to Gabriele d’Annunzio and will be held at the Vittoriale in Gardone Riviera, on Lake Garda, at the invitation of President Giordano Bruno Guerri.

The Mayor of Pietrasanta, Alberto Stefano Giovannetti, says that «It is only by reconnecting to our past, to the history of the places that we live with conscious fullness today, that we can appreciate the present with maturity. It is a dialogue that our administration, through yours
daily action, tries to enhance and promote by any means. Memory is the most powerful source of appeal that we all have available. We have before us a summer with so many unknowns that a responsible administration must balance with certainties. The Versiliana Foundation with its programming, and thus the Chisesi exhibition, together with the many events that will continue to characterize our cultural and artistic proposal, I believe are a solid and necessary response to tourists and visitors who will choose our land and our Tuscany in these months.

In this context, the container of the La Versiliana Festival is a hub of great importance for all Versilia ».
Adds Senator Massimo Mallegni (councilor for culture and tourism of the Municipality of Pietrasanta) that «The exhibition of Andrea Chisesi I am convinced the public will like very much for the freshness of the technique linked to his obsessive artistic research. Villa Versiliana is the natural place for its painting which is freely inspired by Gabriele d’Annunzio that we all link to this space full of memory and meaning. It is a fascinating journey that enriches and enhances the cultural offer of our city “.

The President of the Versiliana Festival, Alfredo Benedetti, strongly wanted this exhibition precisely in the season in which Versiliana dedicates its Festival to Gabriele d’Annunzio: «Andrea Chisesi is an artist of great value that struck me from the first moment and the works exhibited in this exhibition represent a union between art, territory, poetry in which our Festival fully recognizes itself. Gabriele d’Annunzio will be the common thread that this year will cover many of our events including the laying of a bronze bust right in front of the Villa that hosted the Vate’s living rooms and a series of meetings curated by Giordano Bruno Guerri, top expert of D’Annunzio’s figure and work ».

For her part, the curator of the exhibition, Marcella Damigella, explains that “Chisesi’s poetics is based on the extension of temporal connections and memory. This network of relationships links the feeling of a continuous present, like the concept of relativity developed by Einstein, which we find in the artist’s canvases; in this sense, pictorial preparations can wait up to 10 years before finding the right image and for this reason he paints even more canvases at the same time, adding parts or denying others in search of an ever-changing balance “.

Giordano Bruno Guerri, President of the Vittoriale degli Italiani, says that “the growing interest that Gabriele d’Annunzio also arouses in young and highly talented artists – Andrea Chisesi has both characteristics – is proof that Vate still speaks to intelligence of the world, arouses emotions, awakens passions. Moreover, with Chisesi’s work, the virtuous and natural bond between Vittoriale degli Italiani and Versiliana is strengthened, especially for the benefit of the public “.
Andrea Chisesi’s Versiliana exhibition is enriched by the catalog published by Materiarte, which contains writings by Giovannetti, Benedetti, Mallegni, Guerri, Giuseppe Marseglia and by the curator herself.

FROM NATURE TO DETERIORATION
The exhibition “Stones of Memory. Omaggio al Parente “marks Andrea Chisesi’s debut in Tuscany and his monochromes, driven by the clear D’Annunzio re-enactment, are inspired by nature and its elements, first of all water and light. In the 13 rooms of the Villa it is displaced like this
a temporal path which – as d’Annunzio wrote – represents the iconography of the «mysterious faculty of penetrating into every object and transmuting itself into it», therefore the vitalistic «fusion», in a cognitive path between Versilia and ancient Greece and the mythical time that
it persists over time.
Andrea Chisesi’s link with nature – which transforms without destroying what man has created – is the deterioration, the beauty of death which is not an end, but a rebirth, a new stage of things.
Referring to art, d’Annunzio wrote that “the greatness of a work is not measured by the number of suffrages that welcome it but by the impulse which it determines in rare closed spirits, by the sudden anxiety that it raises in a man of action or sloth or merchandise, to heartbreaking perplexity that she acts in an already resolute fate “.
By showing that he has internalized the “lesson” of the Vate, for Andrea Chisesi beauty is not a decuman of canons from which art itself, the product of a very personal reinterpretation, can reveal itself, but the voluptuousness of rigor that with the passage of time fold to modernity.
THE EXHIBITION
The collection of “fusions”, the term with which the artist calls his technique, dictated by the grafting of painting and photography, boasts among the subjects the highest expression of sculpture from classical art to Michelangelo: the Barberini Faun, the Laocoon , the Belvedere Torso, the Moses, the David and the Nike by
Samothrace; these are just some of the subjects transposed in the 21st century, bearers of aesthetic values, those that each of us retains as the certainty of a container of history and culture, an indissoluble treasure chest over time.
The “drips” on Chisesi’s canvas reveal the identity of the image, since his technique experimented 25 years ago allows the white color to welcome the image, creating a partnership between light and shadow, in a fragmented memory of its volume; the image appears almost
impalpable, a re-enactment of lost times, of new sacred myths, so that “the stones of memory” remain suspended as wishes never dormant.
The water dances with gravity, follows the white color in an infinite verticality, the lines flow on the canvas creating a dense rhythm on the dark background, Chisesi analyzes the ability of water to transform the stone, to return to it as an elixir of life who never escapes his duty.
In marble processing, water is an essential element, as in the artist’s painting, so much so that d’Annunzio defines water “sovereign”, that is, life itself, which escapes forever. The spring water, the water that bathes the tamarisks, thus becomes one with nature itself: the drops leave the rigor and transform into leaves, flowers or arabesques that he calls Matrem, Chisesi’s preparations are covered with dogma images giving them a new vision, rich in nature which with its flowers – the “matrem” name of a particular flower that grows spontaneously – merges with the solidity of the stone. The monoliths are painted with light organisms, they contribute to the affirmation that true beauty is contained in nature.