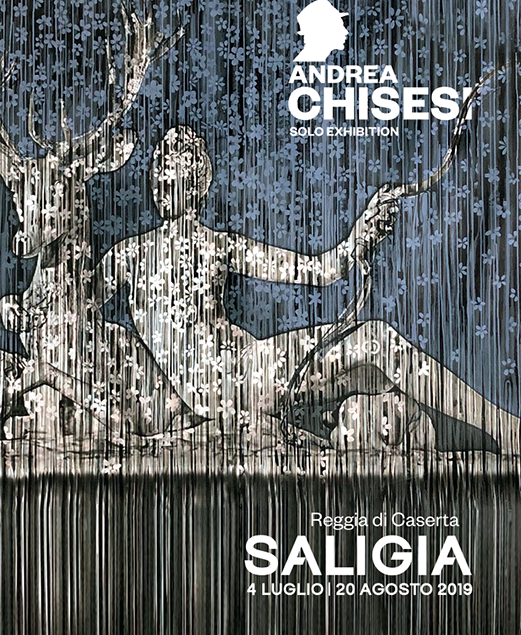 The artistic poetics of Andrea Chisesi is placed in the inimitable frame of a majestic illuminist utopia. The Royal Palace of Caserta, absolute masterpiece of ‘700 european art, hosts the exhibition of a contemporary artist whose precise intent is to dialogue with the past, translating the eternal and immutable humanity moral features into modern imagery.  Chisesi’s artworks scan vices and virtues, representing universal concepts through precise symbolisms of classical forms, ancient monuments that tell their stories through centuries stratification, admirably reconstructed thanks to new supports experiments, fragments and shreds of old avertising posters recovered by the artist in countless and incessant urban sweeps, corroborated by suggestive and exciting document discoveries  and hidden proofs of a forgotten but present past.

Layers do not cover or hide the ancient appearance but enhance them, representing a syncretic end point, a very particular consubstantiality between ancient and modern, the eternal contrast between vices and virtues and the contemporary, frantic, chaotic, disorderly concentration of images and moral openness that confuse and render the judgments indefinable.

SALIGIA is an acronym of late Middle Ages, the result of a literary civilization that loves mnemonic aids, which contains in one word the initials  of the seven deadly sins (in Italian), an extreme synthesis of a long artistic research that led Andrea Chisesi to explore the lustful gaze of Actaeon, the deadly wrath of Achilles, the sloth of the sleeping satyr, the pride of Ugolino, and envy, gluttony and greed too. But also the extraordinary virtues, represented by the de viribus illustris gallery, with the portraits of the Caesars, of the ancient matrons, and of the Gods. A precise connection, subsequently, links Andrea Chisesi’s art with the exhibition context: the Royal Palace of Caserta; an 18th century masterpiece that contains precise finds of the Ancient, manifesto of a European civilization at its cultural peak, where the rich rococò movements give way to the sober lesson of the classical world, by rediscovering Greek and Roman forms that they relived with overwhelming actuality by the incredible discoveries of Pompeii and Herculaneum.

An illuminist committenza that created the exhibition frame for Chisesi’s artworks three hundred years ago, which do not alienate themselves from the context but interact with it, in a sublime union from which new artistic life and interpenetration of a noble and ancient monument in contemporary experimentation and artistic research..